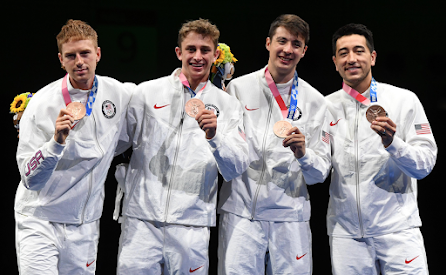 Gerek Meinhardt (furthest right in photo) and Nick Itkin (second from left) won an Olympic Bronze Medal in the Olympic Foil...   It's the second Olympic medal for the United States in this event since 1932.

Meinhardt '13 is married to Olympic Gold medalist and fellow Domer Lee Kiefer '17.  Itkin '22 is a two-time NCAA Champion and a rising senior at the University of Notre Dame.