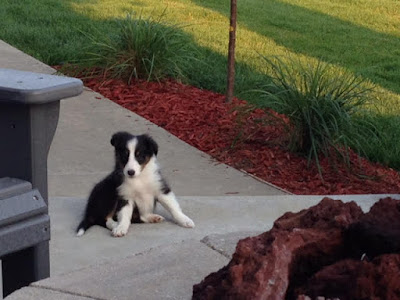 If you're a pet owner -- you'll understand what my family went through this afternoon...

About 2:30 PM ET today our dog Muffet (yes, she's named after Coach McGraw) came up missing.  She's a three year-old Sheltie -- photo above of her on the day we brought her home in August of 2013.

Well, after a drive and walk around the ND campus -- a trip to the Grotto -- and many car searches around the area just south of the Notre Dame campus, it appeared she was a goner.

Until -- my cell phone rang at 9:43 PM ET and on the other end was my neighbor Polly Pajakowski with this news;  "Come on down to the outside bar at Brother's Bar & Grill, they've found Muffet !!!"

Well, I made a beeline for Brother's -- only to see a group of people standing around and no Muffet -- I have to admit for a second I thought I must have not heard Polly correctly...

However, I was soon introduced to my four newest super heroes;

The four of them were part of a "group of about 12" who cornered Muffet out on Angela Boulevard at the Eddy Street intersection -- around 2:45 PM ET today.  They caught Muffet -- which is a miracle in itself since she's quicker than Rocket Ismail -- and immediately took her up to Will's apartment in the Foundry on Eddy Street.

Here's where the story gets interesting.  Will was moving out of his apartment today.  He's a junior at IUSB -- on their golf team --- from Newport Beach, CA.  Susan, Will's Mom was in town to help facilitate the move.

They immediately called Animal Control to report that they had found a dog -- the guy who answered the phone said "we're too busy, we'll come by tomorrow."  Susan didn't like this reaction so she started having thoughts about taking Muffet back to California with her -- instead of putting her in the dog pound.  Will immediately called the folks at the Foundry to see if he could stay an extra night (they said YES) so he would have time to post photos of Muffet in spots on Eddy Street in the morning...

Then fate struck -- three of our neighbors; Chris and Polly Pajakowski and Charlie Hayes and his Sheltie "Reggie" -- were sitting at a table at the outside bar area at Brother's when Susan, Stephanie and Polina walked by and saw Reggie -- who looks a little like Muffet.

Susan Nord stopped and said "we found a dog today that looks a lot like your dog..."

Well --- that little news nugget set off a quick train reaction and three minutes later, I'm in Will's apartment being reunited with Muffet.

I can't thank Will, Susan, Stephanie, Polina, Chris, Polly, Rocky Geans, Charlie and "Reggie" for the roles they played in this seven hour search and rescue mission.  And, I must thank the guy at Animal Control who was too busy to pick up Muffet today.

Charlie Hayes -- upon hearing the news that Muffet was missing -- headed out on his own to find her.  Chris Pajakowski and Rocky Geans took off on their bikes and searched the Notre Dame campus.  What great friends and neighbors we have.

A BIG THANK YOU TO ALL OF YOU!