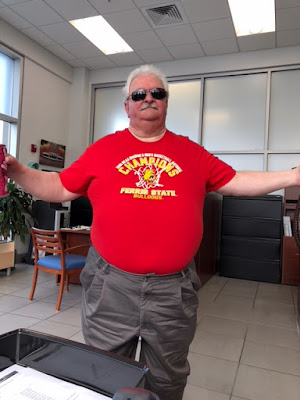 I received a text this morning from my cousin Patrick Doyle (like me, a huge Notre Dame fan) with a photo of a young man named Dan DelGrosso (pictured above) sporting a Ferris State Bulldogs National Championship T-shirt at Two Rivers Ford in Mt. Juliet, TN.

Our Ferris State Bulldogs won the NCAA Division II National Championship in basketball this past April!

Dan, a 1973 Ferris grad, grew up in Dearborn, MI -- but now calls the Volunteer State home.  Pat's son Dustin (he's my cousin but, I think of him as a nephew) works with Dan in their Commercial Sales Department.

I loved seeing Dan representing the "crimson and gold" of Ferris (my alma mater and Pat's too!) in an area fond of the color orange...

When was the last time they won a National Championship in Tennessee?