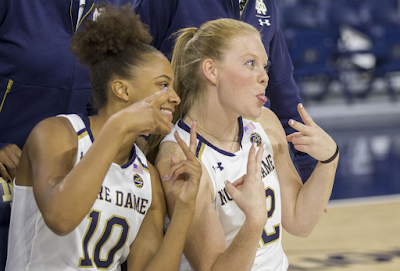 The hard reality is Notre Dame Women's Basketball will return only 10.6 points per game for the 2019-20 season -- with the announcement this evening that Jackie Young will be leaving early to purse her dream of playing in the WNBA.  Here's the returning roster along with the two incoming recruits -- and their points per game average:

With a projected roster of only eight scholarship players -- and two walk-ons -- I've got to believe that Muffet & Company are looking hard at transfer candidates.

Trust me -- many college coaches would love to have FIVE McDonald's All-Americans on their roster.

It's going to be FUN to watch how this in-experienced team comes together.
Posted by Jim Small at 8:10 PM