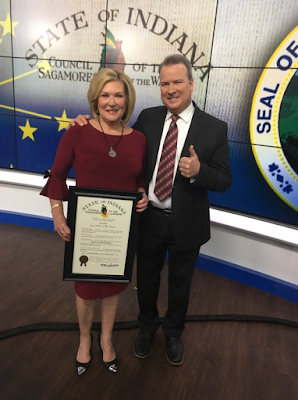 WNDU-TV anchor Maureen McFadden was given the Sagamore of the Wabash award (learn more about the honor at the link below) today by Indiana Governor Eric Holcomb.  Maureen, a Saint Mary's graduate and the mother of a Notre Dame alum (and two Indiana University alums) has teamed up with her Domer brother Terry McFadden here on the airways in South Bend.

The sister-brother anchor duo has had a long run together -- with just days to go -- as Maureen announced a few months ago that March 15th would be her last day, after nearly 40 years at the station...

That's Maureen in the photo above with her brother Terry...

LINK:  SAGAMORE OF THE WABASH
Posted by Jim Small at 3:52 PM